"Trails of Anguish was a Black Metal band from Montreal, Canada formed in 2000. Their lyrics dealt mostly with depression, misery, hate, and emptiness, which is why they are considered a “Suicidal” or “Depressive”
black metal band. The band released two EPs in 2001 and 2003 before disbanding."


I'm not up to speed with much black metal seeing as how I'm not a big fan but I have listened to most of the essentials and enjoy acts such as Deathspell Omega, Havojeh, Ved Buens Ende, Peste Noire, Carpathian Forest, and Beherit. Seeing as how I don't know too much about it, a black metal band has to really move me and capture the essence of everything I like about it to even consider throwing it up on my blog and Trails Of Anguish did just that. They stray away from the typical style of BM and focus on more depressing lyrical content and have a real progressive sound to them rather than just the same old tremelo picking but still manage to keep a really fucking raw sound to it. The way the guitar riffs are worked are just different and well... technical! Another thing I like about ToA is the innovation of using blast beats very effectively which just makes it sound very conventional. I don't occasional upload much BM so you know this is the good stuff. I'm trying to get very diversified in it so be on the look out for more black metal updates to my blog!

This video has a very shitty quality to it. Sorry. :/ Just pick up the album. 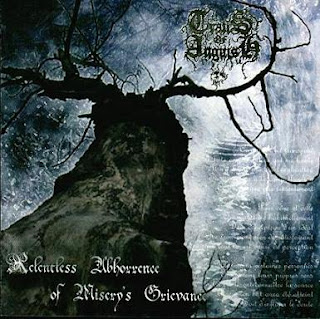