"Kel a friend of Piggy mentioned look who’s on my facebook page …Piggy looked it was Agz we hadn’t seen each other for about 17 years!! So after a few months we finally got to drinking (picking up where they left off really!) After talking about our old band Piggy phoned Agz hey I reckon I can sort a couple of guys out for a band!So Agz (HIS BLOG HAS BEEN ADDED TO THE NEWS FEED ON THE RIGHT YOU CAN FIND UPDATES AT THIS BLOG) started writing new lyrics anyway its took nearly 6 months to get underway but on the 12th Oct 2009 Dr AIDS was born at 18.30!!! Zod & Sid where drafted in on Gits & Bass.Looking back on some of these practices now no wonder people never took us serious we didn’t!3rd Feb 2010… Zod packed in left the band cause of musical differences !! But left the band with a couple of tunes you can find on the demo15th Feb 2010 Petch joined!!!April 2010… Sid left the band got other commitments!Over the next few months our 3 hero’s got tighter & tighter untilJuly 17th … DEMO RECORDING!! … NECROQUEGCUNTCOREOct 20th few months’ hiatus due to the singer getting sacked PUNK EH!New bass player new era! Northy Joins on bass!!December 6th first gig Liverpool went well …OR DID IT PETCH???December 22nd Joe Mawdsley joins on drums & Piggy moves to double vocals with Agz for a new & Improved brutal fuckin sound!!!!THE FUTURE GIGS DIY EP & FULL ALBUM WATCH THIS SPACE"
Move over Misfits and Cramps, we've got new horror punks in town and unlike you idiots, these guys know how to fucking SHRED! Dr AIDS bring a very humorous sound to the crust scene with their dark, hatred-filled lyrics about very basic things such as ice cream, trannys, and pedophiles entitled "NECROQUEGCUNTCORE".  Their way of playing is very heavy in a sense of being metallic as fuck but also have a dominant d-beat section. They're too heavy to be called punk and too light to be called metal so they're just in the between looking to show both scenes what's up. What I love most about Dr AIDS is the that you can just tell that they have fun doing what they do and aren't afraid to speak their mind. Nothing beats a bunch of crazy drunk guys sitting around writing some hilarious tunes. Take some lessons from Dr AIDS and stay away from the Ice Cream man! 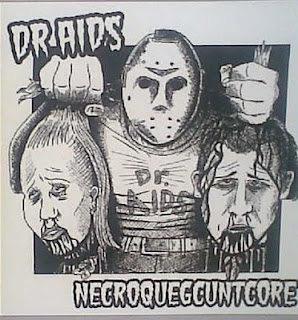