Appalachian Terror Unit - Its Far From Fucking Over (2010)


"Appalachian Terror Unit is a dualsex-vocal Huntington, West Virginia anarchist crust punk band. The often mispronounced “Appalachian” in the band name is pronounced “apple-AT-chin” as guitarist/vocalist Chris clarified in a mid-‘06 Profane Existence interview featured in PE #52/53. Members are: Sarah (vocals), Chris (guitar, vocals), Phil (drums), and Matt (bass). ATU cites influences from Detente, Amebix, Anti-Cimex, old Sepultura, Final Warning, Misery, and Bastard. However many have compared them to Nausea, so much so that according to Chris they have been nicknamed “Extinction Side 3” by some. ATU released a 7” titled ‘Armageddon Won’t Be Brought By Gods’ in early 2007 on Profane Existence. They are expected to release a full-length LP on PE in the near future."


ATU are probably one of my favorite anarcho-punk crust acts out there today. Not only do they have dual vocals, they also bring back the old school Nausea-esque sounding punk with topics such as technology, war, and other apocalyptic topics. I'm hoping the best in 2011 with a new album release by them but I can only hope right now. This 2009 release is sure to have you wanting more because I know I do. If you're a fan of bands like Witch Hunt, Antischism, Nausea, Kakistocracy, etc then this is right up your alley! 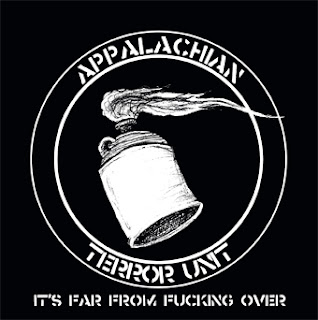