"Down-tuned and distorted seismic emanations originating at the earth’s core. This sonically epic and benevolent force has been documented on one demo cdr (2007) and one vinyl lp (2011)."


IT'S ABOUT FUCKING TIME ECOCIDE HAVE RELEASED SOMETHING OTHER THAN THAT SHITTY RAW DEMO! Nah, it wasn't that bad but the production was SO bad that it made it pretty much unlistenable to most people's standards. Now that four years have passed, Ecocide has FINALLY put out another release. This 5-piece female fronted apocalyptic crust band from Texas really take todays crust to a new level. If you're familiar with bands like Agirmonia, Morne, and Dead To A Dying World, you're going to LOVE Ecocide. They have that really downtempo, dark, and depressing sound that just sounds so fucking satanical. The first track starts out with a 5 minute instrumental that is pretty much giving you a sneak pick of what the album is going to provide instrumental wise. Static, the next track, is a 9 minute melodic as FUCK song  that best displays their musical talent. The vocals kick in and it's like you're in hell. The female's vocalist is just pulverizing on your ears and the when the dual vocals kick in... YEAH, ABOUT THOSE DUAL VOCALS. Probably some of the most guttural male vocals I have EVER heard. If you're noticing a bit of a blackened sound you're not alone. Sure, they may not have raw blast beats, but there is some slight tremelo picking that adds to that black metal feel. Half way into the song it switches to some piano and spoken word. I don't know about you but I think the more experimental and different uses of instruments and samples the better. The last two tracks really make use of the cello. It sounds like to me there is some kind of Middle Eastern or Western Asia influence with some stoner metal-esque riffs. It almost kind of sounds like Al-Thawra or something. Bagpipes maybe? I don't know but whatever it is it just adds to that melodicness and makes the band all the more mysterious with their music. This is about my fifth time listening to this album and I seriously can't get enough of it. A big thanks to my pal Ike for purchasing this album and making it accessible for you all. Without a doubt one of the better crust releases this year along with Dead To A Dying World's self titled album and Parasytic's Poison Minds. The pre-order for this album should be soon up either at Bad People Records, Burnt Bridges Records, or possibly from their bandcamp.

There's a studio version of it on youtube but I really this version a lot more. 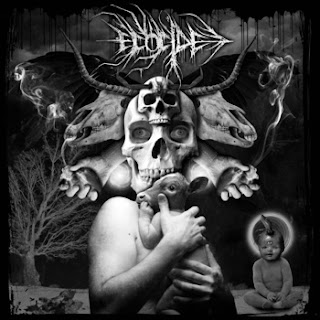