"Blut aus Nord is a black metal band from France (Mondeville).The band started in 1994 as a solo project, with Vindsval playing all instruments under the name Vlad. He released two demos under this title before changing the projects name to Blut Aus Nord before the release of Ultima Thulée in 1995. The next three albums were recorded with the aid of session musicians: It is only recently that the group has had any permanent members apart from Vindsval (who also played in The Eye and Children of Maani).The project’s most critically acclaimed release is The Work Which Transforms God, a concept album which - in spite of being mostly instrumental with none of the lyrics made public - is meant to challenge the listener’s prejudices and preconceptions about reality, life and various metaphysical subjects. The Work Which Transforms God has been almost unanimously praised in reviews and was named by Terrorizer Magazine as its number one album of 2003.Other full length albums from Blut aus Nord include- Ultima Thulée 1995 (black metal)- Memoria Vetusta I: Fathers of the Icy Age 1996 (black metal)- The Mystical Beast of Rebellion 2001 (black Metal)- The Work Which Transforms God 2003 (Industrial/ambient/black metal)- Metamorphosis of Realistic Theories 2006 (Industrial, black metal, avant-garde)- Odinist - The Destruction of Reason By Illumination 2007 (black metal)- Memoria Vetusta II: Dialogue With The Stars 2009 (avant-garde, black metal)"


The critically acclaimed Blut Aus Nord are back again with another experimental as fuck album entitled 777 Sect(s). These Frenchies been in the music business for over 15 years and they're back again to hammer out that earth shatterign sound. For those of you who aren't familiar with this Blut Aus Nord, they're an essential black metal band if you're looking for anything avant-garde, along with Deathspell Omega of course. BAN have already solidified their place in the black metal scene with The Work Which Transforms God, an industrial influenced style of black metal with some ambient sounds that had me literally speechless the first time I listened to it. I remember listening to that album a younger age and was just "...MY GOD IS THIS AWESOME!!" Three years later Metamorphosis of Realistic Theories was released. They took same the approach but adding adding a lot more unorthodox structured avant-garde style and went on to to make more albums similar. Now, 777 Sect(s) has dawned upon us and has brought that familiar industrial style black metal and hints of avant-garde style here and there. The album starts out with Epitome 1, a fully instrumental 8 minute track that's just full out atmospheric sounding only to be followed by another track similar, appropriately named Epitome 2. As the album picks up, vocals are added and the real avant-garde feel starts to kick in. The deeper you get into this album the more and more it feels like a mix between The Work Which Transforms God and Memoria Vetusta II: Dialogue With The Stars. I'm glad to hear this follow up from What Once Was... Liber I, which I thought was a forgettable album. Not forgettable as in it's but just forgettable as in there's better Blut Aus Nord releases and that certainly wasn't one of them. If you're looking for the more atmospheric side of Blut Aus Nord this would be the way to go. They capture everything displayed in their previous albums and then some. WELP, IT AIN'T NO PARACLETUS BUT IT DAMN GOOD, K Y'ALL? <---- that was me in my hick accent. Disregard that.

This track has a slight Portal feel to it... I'm really digging it. 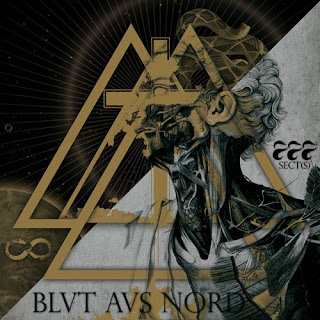