Bringing back the straight edge back to powerviolence! I have a few friends who know the band mates personally and  say they're a nice bunch of people. Rape Revenge are heavily influenced by riot grrrl and feminism with such tracks as Fuck Your Gender, I'm So Gay, and Women's Studies. This band incorporates all the elements that powerviolence bands need have and then some. Their fast guitar playing, SCREAMED vocals, and overall fast as fuck tempo has me to believe that they're trying to replicate some sort of Punch sound but not quite. If the phrase "unreasonably pissed off" were to be used in this instance, I think everyone could relate to it when listening to Rape Revenge. Thanks to those who recommended me this band because I LOVE them! And thank you to the band because I love your shit. Seriously, I want to see a follow up and everything. This is definitely a change from the typical powerviolence. Oh yeah and if you want some copys of their stuff be sure to email Samantha directly at raperevengeband@riseup.net

Judging from this video, these folks are really pissed off for no reason. I love it! 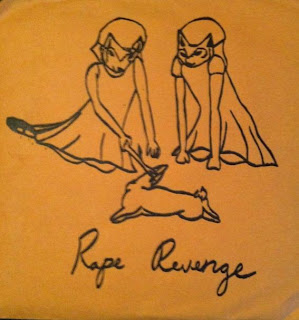