"Black Metal hatred and desecration started by V666, Sidapa, and Royce in the Phillipines by the name Deifago. This was the first black metal band on Filipino territory. Several demos were put out in the early 90’s, some never printed, until 1998 when the band went on hiatus.It was 6 years, 6 months, and 6 days until the band began their reformation. Signing with Morbid Moon and acquiring Mortigor’s drummer, as well as moving to Costa Rica, brought the band to a new level of brutality. Comparable to Canada’s REVENGE, “Satanik Eon” was a full-length of striking attack on Norsk clones and weak melodic metal. The album (both in LP and CD) was released by Morbid Moon Records (Canada).Their second full-length is to come out later this year, ‘Filipino Antichrist’. Wargoat Records will be putting out a split 7” (500 copies) in August 07 with Vancouver, Canada black/death metal vengeance SHORES OF TUNDRA (Vancouver, Canada black/death metal). Warhammer Productions will be putting out a split CD with DEIPHAGO and Vancouver, Canada war/black maniacs NECROHOLOCAUST!"


Here's a brief description from last.fm about what bestial black metal is.


"The term bestial black metal is often used for black metal performed to its most aggressive and extreme possible, where bands concentrate more on aggressive music and less on blaspheming/occult lyrics. It’s not uncommon for bestial black metal music to incorporate elements of old school death metal (blackened death metal bands such as Behemoth, Belphegor, Goatwhore etc. don’t count) and/or thrash metal.Some pioneering bands of this style of black metal include Sarcófago, Blasphemy and Beherit."


Deiphago are one of those defining black metal bands that needs no genre classification. Sure, they may play in a black metal style, but the kind of black metal they play is unrivaled. I'm assuming they're a big deal in the Philippines seeing as how they're from the first black metal band from that country. The sound that Deiphago captures is in vein of thrashy black metal bands like Sarcofago, Behemoth, and Goatwhore. They incorporate lots and lots of raw sound to give it a real authentic feel.There is lots and lots and LOTS of lyrical content dealing with anti-Christianity and praising none other than Satan of course. Aggression is the key to Deiphago's when it comes to Deiphago's awesomeness. Like, if you thought Nattefrost was bad wait until you listen to these bad ass mother fuckers. If you want a kvlt as fuck black metal band THIS would be it.


On a sort of related note, I was standing near my staircase looking up at the mirror at the top of the stairs that was inside my bathroom. The door was open and the song "Satanic Metal" was playing. I was zoned out and I completely was just focusing on the word "satan". Satan... Satan... Satan... Next thing you know, I see the door slightly beginning to open more and more. Then I question myself, "Is this fucking real?!?!" as I start to see a mysterious black figure emerge from behind the door. I could not stare at it any longer and quickly turned away. I have no clue what the fuck I was seeing or anything. It was just really really really strange. Was I tricking my mind into seeing this or what? Was it the music? I have no fucking clue. Deiphago clearly warped my fucking mind.


This is by far one of my favorite album covers. Click image for a bigger scale. 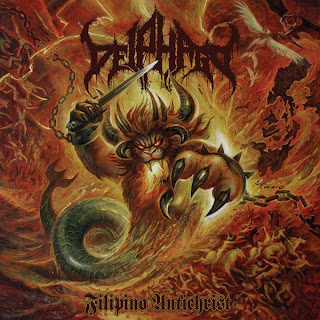