"Late in September of 2008, Ammo and Miguel came together to begin an experimental death metal band with the potential to move forward as musicians. Shortly thereafter Ammo and Miguel decided to search for a vocalist and recruited Eston Browne (Animals Killing People) to the fold on vocals in October after being impressed by the sound and sitting in on beginning rehearsals. A focus and a name of the band was to be determined and all three agreed on Humanity Falls. We believe(d) that slowly humanity is rotting itself away and that the end is near for all of mankind due to the actions that face us daily and the choices we make. This is our philosophy and the drive behind the lyrics we create.
Drawing influences from bands such as Morbid Angel, Discordance Axis, Gorguts, Immolation and Mithras, Humanity Falls began to slowly work on a 4 song “self-titled” demo after the recruiting of Eston. The demo was recorded in their rehearsal space on a 8 track recorder to be released in January 2009. Live shows followed and Humanity Falls played its first event on February 1, 2009. Humanity Falls has shared the stage with the likes of Krallice, Gigan, Misery Index, Blasphemer (Italy), Malebolgia, Malevolent Creation and many other acts.

The goal for Humanity Falls is to take our sound to another level. Our philosophy is to create a unique sound but to maintain creativity and emotion that has become absent in modern metal. We believe the death metal scene as late have been growing predictable, and we would like to bring back the sound that makes death metal special and unique. In August 2009, Humanity Falls parted ways with Miguel Delgado. After a month of searching, Humanity Falls recruits Edward Bednarek on drums in late September and Humanity Falls begins to write its first full length record with the complete line-up titled “Ordaining the Apocalypse”. Humanity Falls releases a promo CD in December 2009 containing songs “No Room For Ingenuity” and “To Have or To Be?” and a Discordance Axis cover of “Pattern Blue”. Another self recorded release. In May 2010, Humanity Falls travelled on a tour for their debut CD called the “Divine Manifestation” tour - their first - to much success. Humanity Falls’ 2009 Promo CD is reviewed by Decibel Magazine and shortly thereafter in August of 2010 are signed by The Path Less Travelled Records. The Path Less Travelled will releasing the debut full length “Ordaining the Apocalypse” and it will be available in stores January 2011."


Humanity Falls switches it up in both grindcore and death metal scenes by not only combining the two but taking influence from Discordance Axis and throwing a lot of noisy sounds into the mix. At times there a bit of post-rock and ambient influences which really had my head spinning during the interlude of the album. The objective behind this band was to create a totally different sound and they achieved it nicely. Their cover of Pattern Blue by Discordance Axis was also very bad ass and had a strong DA feel to it meanwhile throwing in tons and tons of tempo changes and tremolo picking. The blast beats aren't excessively used at all and there's lots and lots of progressive guitar work. This album is just pure gold. It's really great to hear a refresher from the typical death metal and grindcore. I can't wait to see what these guys put out in the future! 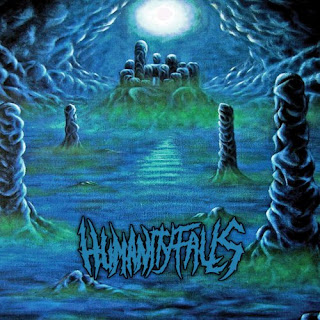