"It ain’t about the music but the words behind it,not about being the best or having the most friends,its about surviving and being real . Blagg are here to complain about this stinking world & life that surrounds it. We are heavy in words & in music & combine it all in a more raw sound which is more in line with the 80’s crust which we all grew up with and still enjoy. We are from a bleak run down town called Blyth in the Northeast U.K. where it is over run with nice safe indie bands(AND CAFES) & people don’t understand what we are trying to do or say. We think we have something to offer & folk who take time out have enjoyed what we do & we get compared to alot of our fav bands which have all come out in our style of play. Don’t think we fit into any genre really and to be honest don’t want to have labels or tags, we give 100% in what we do for little reward…hope you take time to get to know us and mayby put us on sometime{100% d.i.y & real} If ur into Peace and Change drop by Thanx."


Blagg doesn't give a shit about your scene. Blagg doesn't care about being labeled (sorry guys for throwing labels down at the bottom but you know how it is). They just care about friends, family, music, and all in the world that is needed for survival. There are a lot of injustices in the world and they're here to point them out. These loveable bastards are just in to promote peace and change through music. Blagg is a crust band inspired by 80s acts such as Amebix, Axegrinder, and Nausea. Lots and lots of influence makes itself known when the album first starts out with Save Me/Bloodbath, an apocalyptic track about war and how you should make changes in the world before it's too late and history repeats itself. What I love most about Blagg are how innocent and non-sugarcoated the lyrics are. Seriously, you can tell these guys want to get out there and change how people think. Not just thinking about your scene, not just their scene, but revolutionizing the ENTIRE world like A//Political states. As for the musical side, Blagg is most represented by an Amebix-esque sound with some heavy, metallics riffs and a bit of a d-beat side which makes for a punishing deliver. The ending track, Wasted, almost has a few dub overs and groovy riffs that almost makes me believe that they were inspired some early ska bands as well. When you choose Blagg you can't go wrong. Okay, that sounded like some shitty campaign slogan. Fuck it. Just pick this band up up and be sure to send these guys a request on facebook and tell them about how you like their stuff right here. 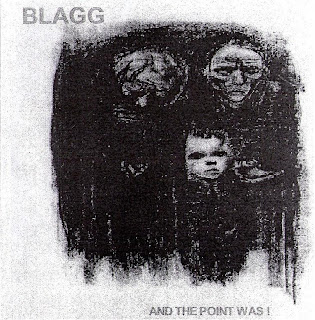