"Life of Refusal is a Hardcore/Powerviolence band from Southern California.They formed early 2010 and solidified a line-up by fall that year. Life of Refusal put out a demo CD in 2010 and a 7” in April the next year, both being self-released."


This four piece duo from Southern California kick it old school with their original powerviolence sound. I was browsing the pictures beforehand and the only thing I was thinking was "Void worship??" and was all FUCK YEAAAAAAH! and stuff. See, isn't this Void worship or what?

Maybe it's just the fact they dislike Christianity? The last song on this track ends with chanting "There is no god" so that might be the case as well. Who the fuck knows. The funny thing is an upside-down cross was used when St. Peter died to show respect. ANYWAYS, enough with the Christian talk. Life Of Refusal burn the house down with their hardcore punk influenced powerviolence with a bit of a fastcore touch. I can totally hear Siege in this band x100000000000000000. Not to mention there's some absurdly strange chugs and metal riffs that take place which add for a very peculiar sound. Just imagine like... Cruel Hand but with a faster and angrier sound. It's good to know there's some original PV out there and Life Of Refusal reinstate this opinion and turn it into a fact. 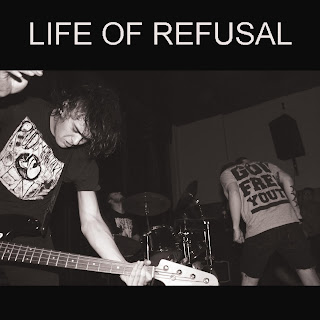