"Swedish hardcore/d-beat band in the vein of Wolfbrigade (one of the members is actually a former member of that band). Full-length album “Same shit but different” out on Crimes Against Humanity Records. On 17. April 2008 the band the band announced they were canceling all future gig and recording plans and rethinking if they wanted to continue playing. For songs, updates and more, visit http://www.myspace.com/endofallsweden"


A nice break from the screamo-influenced neocrust bands, End Of All has some serious major musical talent! Throwing a bit of d-beat in their music for a homage to Wolfbrigade with some kick ass melodic guitar riffs is what End Of All is all about. Not to mention that nearly every song have an insane solo that gets you hooked and wanting more. They have lots more material so there's plenty of it to go around. Pick these guys up today! 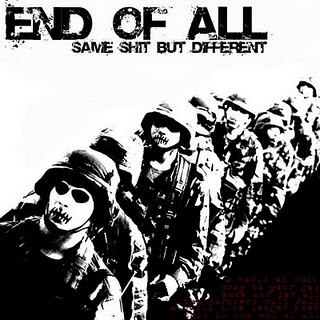