From last.fm:
"Dystopia was a sludge band from CA, USA. The band formed in Orange County, California in 1991, and were popular in both the heavy metal and crust punk scenes, due in large part to their bleak misanthropic imagery. Their lyrics often dealt with human emotion and sociopolitical issues such as environmentalism, racial equality, animal rights, and veganism.
Dystopia is a soundtrack for the world as we know it today. Their sound embodies all of the horrors, pain, agony and desperation of modern day society. They disbanded in 2008, after releasing their third album."
I threw up a later album from Dystopia on my blog called The Aftermath... and I'm pleased to throw up their other critically acclaimed album Human = Garbage. I kind of underminded this album mainly because The Aftermath... had a few of my favorite Dystopia tracks on it but after listening to this album a few times this night I can really sense in the hatred that this band displays. In their track Hands That Molds, a very misantropic feel sets over as the lyrics kick in...
Hands that kill mold illusions of peace
their fucked up pseudo security
destroy to birth technology
to quick the killing of you and me and him and her blind
us humans thinking we are so smart creating challenges
...and so on. If you're really curious for how the song ends you'll have to pick this album for yourself. If you love anything crust and sludge, you need to get this fucking album. It's mind blowing and without a doubt holds the same bar to their later works. 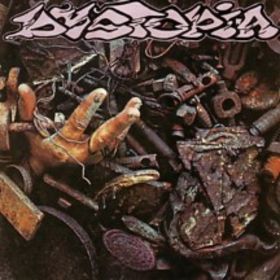