"Agathocles is a Legendary grindcore band from Belgium, who describe their music as “mincecore”. The band started in 1985, and has gone through many lineup changes, but is still going strong today. They have gained an underground cult following through their frequent album releases (including dozens of split 7“‘s, ep 7“‘s, and numerous other full length cd’s/LP’s and compilations).They released new album “Grind Is Protest” in 2008!"


For one thing, if you listen to grindcore and you don't know who Agathocles is, you don't know SHIT about grindcore. Seriously though, Agathocles are the kings of the mincecore scene, way of playing newer grindcore in an old school style taking influences from bands such as Napalm Death, Brutal Truth, and Repulsion. This album has 22 tracks of shredding. Agathocles really take grindcore to a next level with their wicked riffs, fast as fuck drums, and just overall devastating presence. Take a hint from me and get one download one of my favorite grindcore bands. You seriously can't go wrong with this album. Oh and more on mincecore can be found here. Enjoy! 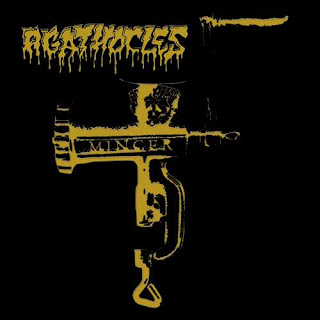