As long as I can remember being a crust fan I have always enjoyed Contagium. Their combination of crust as fuck growled lyrics and metallic riffs really make for an awesome combination. The word "stenchcore" is best associated with them. The feeling Contagium delivers is a very apocalyptic one with very nihilistic lyrics that make for an overall chilling feel when listening to this album. If you're looking for some all out dirty, crusty crust then this is the band to listen to. Check this one out if you're a fan of stuff like Instinct of Survival, Nuclear Death Terror, Misantropicm and Morne. 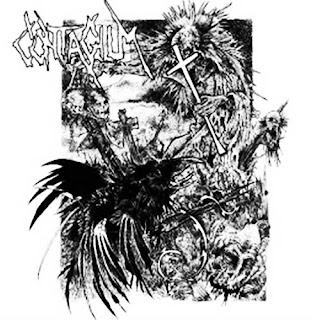