"Antischism was an American crust punk band from Columbia, South Carolina from 1988 to 1998. For most of their existence, the band consisted of: Scott Cooper (drums, vocals, lyrics), Lyz (vocals), Kevin Byrd (guitar), Matt (bass). An additional male vocalist named Brent sang on the Still Life LP. Antischism broke up and then reformed in Austin, TX, as Initial State. After Initial State, Kevin went on to play in .fuckingcom (with Lyz) and Guyana Punch Line, he currently performs in Thank God. Scott moved to Savannah, GA, and played in Damad and Karst, and now plays in Chronicle A/D."


You don't listen to crust if you don't have this. That's all I gotta say. 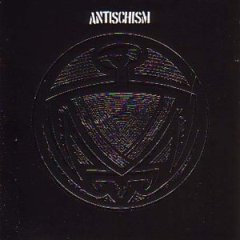