"Looking For An Answer is a Death Metal/Grindcore band from Madrid, Spain. They were formed in 1999. The band started as a side project of guitarist Felix. Later on vocalist Iñaki, and bassist Ramón were added. The band recorded, and played live with a drum machine until the arrival of drummer Moya. The band has lots of oldschool Death Metal, and Grindcore influences, as well as lots of Crust Punk, and Hardcore Punk influences in their music. Looking For An Answer often writes about animal liberation/animal rights, social issues, and human misery. Some of the former/current members of the band are also in the following bands: Machetazo, Justice Department, and Dishammer. The band is currently active, and recently signed to Relapse Records."
This is Looking For An Answer's first album release back in 2004 which incorporated a lot of crust into the mix. Unfortuantely, their album to follow, Extinctión, did not following up with the crust and ska elements but their 2010 split with Ratos de Porão did! This band isn't necessarily "ska" as they are just throwing a few ska hooks at the end of the song which makes them completely bad ass. Apart from the crust and ska, this is one great fucking grindcore band. 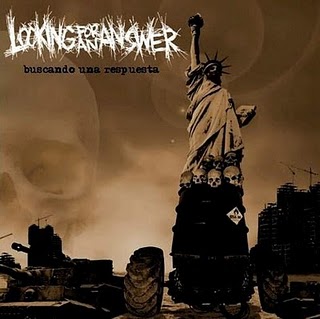